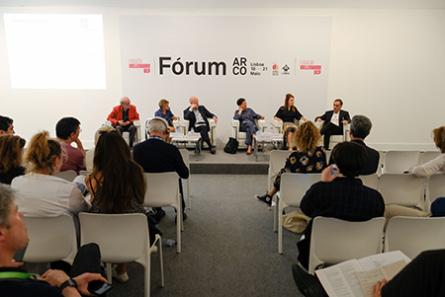 Torreão Nascente da Cordoaria will host the Millennium Art Talks held in corroboration with Fundação Millennium bcp, which includes a Collecting Forum that will shed light onto how and why major collectors do their passionate work. The sessions will include the participation of collectors such as Francesca von Habsburg, José Lima and António Cachola, as well as Carlos Urroz, Chus Martínez, Pedro Gadanho, Markus Reymann, Miguel von Hafe Pérez and João Laia.

There will also be a series of conferences coordinated by Paula Nascimento entitled Africa in Focus, that will focus on contemporary art in Africa, with participation by such figures as Raphael Chickwkwa, Azu Ngagbogu, Jeanne Mercier and Marie Helene Pereira.

On this occasion, in Patio Nascente Filipa Oliveira, will be coordinating  the What am i working on? sessions, which will bring a variety of professionals together to share their current and future projects, including Bruno Leitão, Triologia do Carnaval, Jesper Just, Manon de Boer, Pauline Foessel, Irene Campolmi, Nadine Seigert and Musa Paradisiaca.

To round out the programme, the Ministério da Cultura will organise another conference aimed at students, Fundação EDP will present a book by Pedro de Cabrita Reis, and the latest "Navigator Art on Paper" Prize will be awarded.

Also within the context of the trade fair, Pedro Gadanho and Nicolas Bourriaud will direct the Museums Meeting, which will be attended by figures including Quentin Bajac, Rosa Ferré, Sandra Patron,Katarina Pierre, Manuel Segade and Wato Tsereteli.