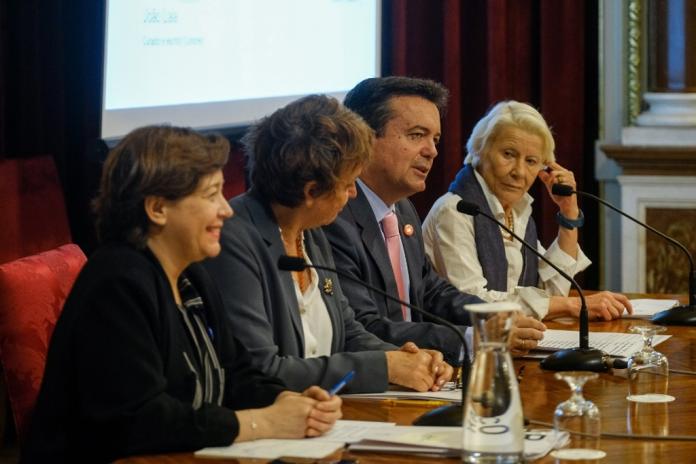 Lisbon will once again seduce contemporary art professionals and art lovers with the 4th edition of ARCOlisboa. Jointly organised by IFEMA and Câmara Municipal de Lisboa, it will take place from 16 to 19 May at Cordoaria Nacional, showcasing Portugal’s vibrant art scene in dialogue with art from around the world.

ARCOlisboa 2019 will feature 71 galleries from 17 countries, and for the first time there will be a special programme for African galleries.

As always, the Fair will be divided into three areas: the General Programme, Opening and Projects. The main area of the fair, the General Programme, will comprise 52 galleries from 16 countries, some of which will be participating for the first time, such as Vera Munro and Georg Kargl. In addition, others return to the fair, such as Krinzinger, Greengrassi, Pietro Sparta and Vermelho.

The Opening programme will again focus on galleries that have been around for less than seven years, with the aim of contributing new information and give the opportunity to discover new galleries proposals. It will comprise 11 galleries selected by João Laia, including newly created galleries Lehmann Silva from Porto and Fran Reus from Palma de Mallorca, as well as Jahmek, from Luanda, or The Ryder Projects, from London.

The Projects section, which will be housed in the Torreão Poente, will exhibit 9 projects by individual artists, submitted to the fair by their respective galleries. These include Daniel García Andújar submitted by Àngels Barcelona; Gerold Miller, submitted by Cassina Projects, and Nicolás Grospierre submitted by Alarcón Criado.

One of the most remarkable new additions to the fair will be the Africa in Focus programme, with a selection of African galleries. Based on Portugal’s unique international position, Africa in Focus will include 6 galleries from Angola, Uganda, Mozambique and South Africa, which will each have their own stands dispersed around the fair. This section, curated by Paula Nascimento will be complemented with a series of talks focused on the contemporary art to come out of Africa, which will form part of the Forum programme.

ARCOlisboa 2019 will also have a special section dedicated to contemporary art publications. Organised on this occasion by Arts Libris, it will feature contributions by around 40 art editorials and a series of talks and debates focusing on the current state of art publications.

Art and collecting will be one of the main talking points at this edition of ARCOlisboa, with a series of presentations featuring renowned professionals from more than 20 different countries.

The Torreão Nascente at the Cordoaria will host the Millennium Art Talks, run in collaboration with Fundação Millennium bcp, including the Collectors’ Forum, which will give a better understanding of what drives collectors and how they carry out their fascinating work. These talks will feature collectors like Francesca von Habsburg, José Lima, António Cachola, Carlos Urroz, Chus Martínez, Pedro Gadanho, Markus Reymann, Miguel von Hafe Pérez and João Laia.

There will also be a series of talks based around Africa in Focus which, chaired by Paula Nascimento, will focus on the institutions of contemporary art in Africa, featuring names like Raphael Chickukwa, Azu Ngagbogu, Jeanne Mercier and Marie Helene Pereira.

The Patio Nascente will also host the ArtsLibris sessions, focusing on the current state of art publications, which will be led by Horacio Fernández and will feature Antonio Julio Duarte, Susana Lourenço Marques, Mariano Piçarra, Jose Luis Neves and Filipa Valladares.

ARCOlisboa has put significant effort into international promotion actions, including national and international press and outdoor media, as well as the guest buyer and influencer programme, which will bring more than 190 guests—collectors, gallery directors, curators and other international art professionals—to Lisbon.

ARCOlisboa has changed its opening hours to better fit in with Lisbon’s pace of life. The new times are: Thursday 16 and Friday 17 May,14:00 to 21:00; Saturday 18 May, 12:00 to 21:00, and Sunday 19 May, 12:00 to 18:00.To encourage more visitors, the general admission price will be 15 euros (5 euros for students). What’s more, to make the most of your visit, you can see all of the participating artists and galleries by downloading the Fair catalogue from arcolisboa.com.

The Cordoaria, one of the most important examples of 18th-century industrial architecture, will have multiple leisure and food and drink areas for ARCOlisboa visitors. On this occasion, the fair space will be extended with the incorporation of a new VIP Restaurant and Lounge, developed by Design Factory with the support of RAR Immobiliària, and with catering by Casa do Marquês. Visitors will also be able to enjoy sitting out at the cafés located at both of the building’s courtyards, operated by the same catering firm. With the help of sponsor Cervezas Alhambra, ARCOlisboa is expanding to other courtyard areas, creating meeting places.

ARCOlisboa 2019 will have the support of the private sector and important businesses and organisations through sponsorship of areas or initiatives at the Fair.

In addition to Câmara Municipal de Lisboa, this edition will have the institutional support of the Portuguese Government, Direçâo Geral das Artes, EGEAC, Marinha, Turismo de Portugal and ATL - Turismo de Lisboa, with sponsors including Fundaçâo EDP, Fundaçâo Millenium bcp, Navigator Art on Paper, RAR Inmobiliária, ROM, Ruinart, illy and Cervezas Alhambra. For another year, the public programme will be run in collaboration with Café Pessoa.

For five days, Lisbon will become the world’s contemporary art capital with the holding of the Fair plus events at the city’s best museums, galleries and collections, including exhibitions on renowned Portuguese artists like João Louro at Pavilhão Branco; António Bolota at Fundação Carmona e Costa; João Onofre at Culturgest; Ângela Ferreira at Fidelidade Arte; Francisco Tropa at Fundação Calouste Gulbenkian, Sara Chang Yang at Galeria da Boavista, and Carlos Bunga and Carla Filipe at MAAT – Museu de Arte Arquitectura e Tecnologia, which will also host the Fundação EDP Prize for New Artists, aimed at giving visibility to emerging artists. The presence of Portuguese collections will also be a big drawing point, such as the António Cachola collection exhibition in the Torreão Nascente at Cordoaria Nacional.

Other exhibitions will showcase international artists, such as Per Barclay at Carpintarias de São Lázaro; Xavier Veilhan and Jesper Just at the MAAT; Michaël Borremans, Vito Acconci, Louise Lawler and Juan Muñoz at a collective exhibition at Museu Coleção Berardo, and various African artists at the exhibition Diversidade Comum at NOT - A – MUSEUM.

ARCOlisboa 2019, jointly organised by IFEMA and Câmara Municipal de Lisboa, will take place from 16 to 19 May at Cordoaria Nacional.

Caption (from left to right): Maribel López, director of ARCOlisboa; Catarina Vaz Pinto, City councillor for culture and international relations of the municipality of Lisbon; Eduardo López-Puertas, Managing Director of IFEMA; Cristina Guerra, Member of the Organising Committee of ARCOlisboa.