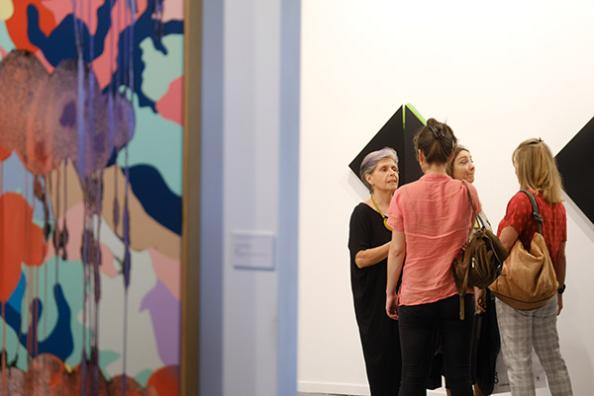 ARCOlisboa 2019, a fair jointly organised by IFEMA and Câmara Municipal de Lisboa, concluded its 4th edition yesterday with a positive result. The brisk pace of sales at the galleries show a solid commitment to contemporary art from collectors, both from Portugal and abroad..

Professionals, collectors and guests were particularly impressed by the quality of the pieces on display at the stands and the greater risk assumed by gallerists in their presentations, which shows increased confidence in the opportunities for business and giving their artists greater projection at the fair. Also of note were the  content and programme of ´Africa in Focus`, which, through its 6 galleries and 3 round-table discussions, have offered a primer on artistic creation on the continent that will ensure its continued presence at the fair

For their part, Fundaçao EDP has also made some purchases for its own collection. Especially noteworthy among them are the pieces by Ana Jotta, Gabriel Abrantes, Carlos Bunga, Rui Toscano and João Ferro Martins.

For the second time, ARCOlisboa has held the Opening Award, which was won by Jahmek Contemporary Art, based in Luanda, and Copperfield, of London. This award for the best stand in the section, with reimbursement of the price of the space at the fair as the prize, was shared between both galleries on this occasion.

The city’s dynamic activity also contributed, as every corner of Lisbon celebrated ARCOlisboa. This enthusiasm included Lisbon’s major players in contemporary art, and not just galleries, artists and institutions, but also collectors, all of whom have offered participants moments in which to come together and share their collections with the Fair’s guests.

Once again this year the Fair received the backing of Portugal's institutions, including the presence of the President of the Republic, Marcelo Rebelo de Sousa, as well as the Prime Minister, Antonio Costa, the Minister of Culture, Graça Fonseca, the Mayor of Lisbon, Fernando Medina, the Secretary of State for Culture, Angela Ferreira, and a number of different officials and personalities from the country’s public life and business community. Furthermore, the Spanish Ambassador to Portugal, Marta Betanzos, was also present, as were the top representatives of IFEMA, Clemente González Soler, President of the Board of Directors, and Eduardo López-Puertas, Managing Director.

Opinions on ARCOlisboa have been widely positive. Representatives from the gallery Leandro Navarro said “we’ve been participating since the first year, and for us this has been best edition of them all. Results were very good both in terms of sales and contacts with collectors.” Vera Cortês  was also satisfied, saying “we are quite pleased with sales, as well as with the VIP programme. Furthermore, we’ve seen more attendance this time around.” Cristina Guerra Contemporary Art highlighted that “the sales volume has been very good. We’ve had more and better sales, which also shows what kind of domestic and international collectors have visited the fair. ARCO’s dynamic nature also spreads throughout the city.”

The African galleries, who participated in the fair for the first time, have also shared similar evaluations. Movart  noted that “we are delighted, not just with the sales, but also with the contacts we have made with collectors and the interest they've shown in our pieces and artists.” Jahmek, meanwhile, pointed out that its “first time taking part in a fair has been a success given visitors’ interest in their Tiago Borges exhibition. We even won the Opening Award,” exceeding all their expectations.

ARCOlisboa, a fair co-organised by IFEMA and Câmara Municipal de Lisboa with institutional collaboration from the Government of the Portuguese Republic; Direçâo Geral das Artes; EGEAC; Marinha; Turismo de Portugal; Turismo de Lisboa – ATL -, patronage by Fundaçâo EDP , and the help of Café Pessoa in the public programme, closed its doors yesterday on 19 May at 18:00 hours. Work will then start on ARCOlisboa 2020.