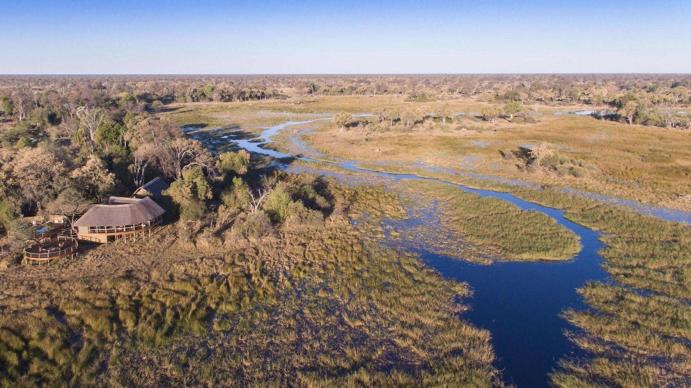 Located in the 'game-centric' Dinare private concession overlooking the Gomoti River, guests staying at Under One Botswana Sky's new camp Mma Dinare (Setswana for ' Mother of many Buffalo' ) have been enthralled spectators watching leopard and wild dog come down to the riverside to drink and hunt.  As Dinare's name suggests, the area is well known for its buffalo with huge breeding herds traversing the concession in their hundreds, often closely shadowed by lion. With a feel of the Linyanti and certain areas of Khwai, the 67,000 acre Dinare concession borders the world-renowned Moremi Game Reserve on the remote south eastern fringes of the Okavango Delta. Due to its mixed habitat of wetlands, savannahs, drier Acacia and Mopane woodlands, the Dinare concession supports an outstandingly diverse abundance of big game, herbivores (from Red Lechwe and Waterbuck to Roan and Sable), impressive carnivores and myriad of birdlife all year round.

Under One Botswana Sky is thrilled to reveal its first photos of the classic 9-tented camp Mma Dinare which can be viewed on their new website on www.underonebotswanasky.com

In contrast to its common-rated 8-tented sister camp Rra Dinare which has far-reaching views over expansive seasonal floodplains, Mma Dinare, nestling in a lush riverine forest, overlooks the Gomoti River. Rra Dinare is located a 30 minute game drive away.

As with Pom Pom Camp and Gunn's Camp, the accommodation of the two Dinare camps is of the luxurious safari tented type. All the camps have their differences and distinct identity, but essentially they all embrace their natural surroundings and allow guests to experience the Okavango Delta in the most comfortable, yet unpretentious way that Under One Botswana Sky is known for.

Both the Dinare camps have swimming pools, curio shop, a double tented family suite, guide accommodation and offer the same activities: game drives, on and off road, nocturnal safaris with trackers, seasonal mokoro on the Gomoti River and game walks with an armed guide and tracker (dependant on walking conditions).

Larger groups requiring 17 tents can be accommodated at Rra Dinare and Mma Dinare and are offered joint sundowners during game drives.

Under One Botswana Sky is exhibiting on the Botswana stand, Hall 6, 6E04.