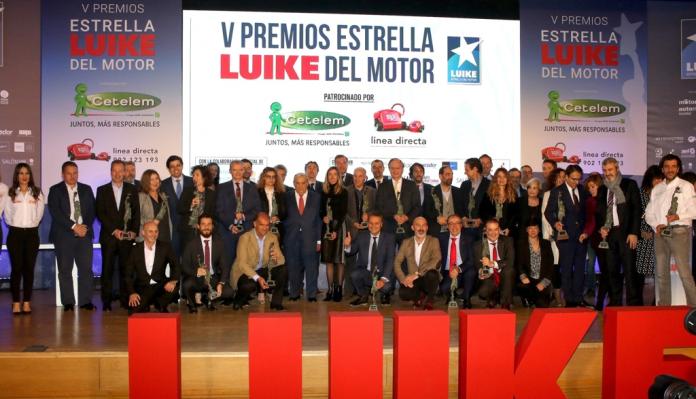 The awards were sponsored by the 15th MOTORTEC AUTOMECHANIKA MADRID, Spain’s leading International Trade Fair for the Automotive Industry, organised by IFEMA, which attracts industry professionals from the Iberian Peninsula, Latin America and North Africa, and will take place from 13 to 16 March 2019 at Feria de Madrid. David Moneo, Director of IFEMA MOTOR, took the opportunity during his welcome speech to recognise the role played by IFEMA in supporting the motor and mobility sector, through its seven industry-related events, including after-sales - the Madrid Auto Motor Show, the VO Trade Show for used and nearly new vehicles, Madrid Auto Professional, FIAA, TRAFIC and Viva la Moto. "No less than 300,000 people visit these trade fairs every year," he added.

The Estrella LUIKE Motor awards also recognise other aspects of the motoring world. These special awards include the José Gómez Mar Prize for the Best Communications Team, named in honour of the pioneer of Spanish motoring press departments, which this year went to Seat. Meanwhile, the Innovation Prize was awarded to Ficosa for its ‘Digital Rear-view Mirror’ project, the first rear-view mirror to incorporate cameras and monitors instead of mirrors, and the prize for Best CSR/Patronage Project went to Ford for their ‘24 Horas’ charity race.

There was also a prize for the Best Mobility Project, which was awarded to Passion Motorbike Factory and its ‘Scoobi Med’ initiative, a sustainable urban mobility vehicle for people and goods designed to offer solutions for last-mile deliveries. The award for the Best Human Resources Project, which recognises the work of humanising workplace environments in the automotive and servicing sector, went to Alsa for its ‘Master Driver’ project, whose aim is to foster continuous improvement among all its drivers, and finally the Honorary Prize was awarded to the Spanish Direct Line Foundation.

The Estrella LUIKE Motor trophies - reproductions of a sculpture by the Cádiz-born artist Luis Ortega Bru, depicting an athlete propelled by a wheel toward victory - also recognise the success of best-selling models, not only within the category of private cars and motorcycles, but also 4x4 vehicles, commercial vehicles, sports cars and alternative energy vehicles.

The winners of the remaining categories were:

The motorcycle sector was also represented at these awards. The winners, by category, were as follows: