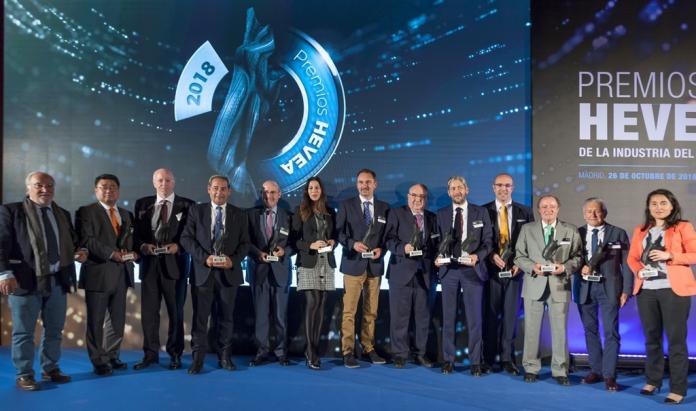 The 2018 Hevea Awards for the Tyre Industry were created with the aim of valuing and recognising the work done by all the people, companies, initiatives and institutions that are part of the automotive after-sales industry that revolves around tyres, a vital element for both road safety and the environment.

For the launch year of the awards, the 12 selected categories attracted nominations for a large number of companies, representing much of the present and the future of the after-sales sector, which employs more than 250,000 workers in Spain. 7,829 votes from industry professionals were registered and validated during the voting period which ended on 3 October, an impressive participation figure which illustrates the strength and driving force of the tyre industry in Spain.

"The Hevea Awards are designed to recognise the value of the tyre industry, a key sector in road safety, and we are focusing our efforts to give it the representation it deserves at MOTORTEC AUTOMECHANIKA MADRID, our trade fair for equipment and components, which will in 2019 bring together more than 56,000 industry professionals and buyers from all across the world," said Lopez-Puertas, who believes that there are many values involved in the tyre industry. "Alongside its capacity for innovation and its ongoing commitment to cutting-edge technology, there is a growing concern for the environment and acknowledgement of its role in social responsibility, which puts it in a privileged position because of its proximity to end consumers and its ability to make an impact, a fact that I would venture to say makes it unique in the world of after-sales services," he continued. According to Lopez-Puertas, "these awards should serve as a platform for publicising the actions undertaken by the sector, making it a standard-bearer for the road safety movement, advocating for sending clear messages to consumers and raising awareness of the importance of tyre qualities and the responsibility for correct maintenance."

IFEMA's General Manager also wished to underline the ongoing educational work that the Directorate-General for Traffic carries out through information and awareness-raising campaigns for road-users about vehicle maintenance and specifically tyres, a vital element for road safety and the environment. "This constant work has made the DGT one of the most important channels for awareness-raising and training, and one on which the automotive after-sales industry depends to get the message to society. For all these reasons, and for the continuing support that the DGT has provided at every trade fair organised by IFEMA in representation of the various sectors of the automotive industry, we recognise the tremendous work carried out by the DGT and their commitment to the intrinsic values of road safety education,” concluded López-Puertas.

In the words of Pere Navarro, Director-General for Traffic, "At the DGT - through information, education and awareness - we will continue to stress the importance of tyre maintenance, checking tyre pressure and monitoring wear and tear on treads. Being awarded this recognition of our daily endeavours helps us value our work. On behalf of the entire staff of the DGT, thank you very much."

OPEN awards the Road Safety Prize to the Ponle Freno platform
Miguel Ángel Cuerno, president of OPEN (the Professional Organisation for Tyre Specialists), spoke about the growth in Spain of the garage and workshop sector and the after-sales industry. He suggested that it will improve over the next few years with the publication of the new Royal Decree on garages and workshops (currently being drafted), which will regulate several important aspects, including illegal workshops, tyre collection, tyre sales and second-hand spare parts. "In addition, the new decree on the official vehicle safety tests, which stipulates the inspection of more parts of the vehicle, and connectivity with users via mobile phone, which will counteract the effect of offers and promotions, will help pave the way to a brighter future for garages and workshops," he said.

OPEN, as sponsor of the Road Safety Prize, awarded the prize to the Ponle Freno platform. The award was presented to José María Quesada, Content Advisor for the Ponle Freno platform, in front of its board of directors and José Manuel Prieto, the Assistant General Manager of Industrial Quality and Safety at the Ministry of Industry. Quesada remarked, "Our platform has just reached its 10th anniversary and this award comes at a very important time for us. Technology has made vehicles safer and roads better, but neither vehicles nor roads are capable of making decisions; decisions have to be taken by drivers. And we, as a media platform, will continue getting the necessary messages to drivers for another 10 years and more - for as long as it takes - putting the spotlight wherever we believe is important, helping administrations with our committee of experts and, ultimately, trying day after day to help reduce the accident rate."

Ponle Freno is this year celebrating ten years of commitment to road safety, a decade in which it has launched various initiatives, including information campaigns on signalling, reporting of offences and road safety education. It has also organised fun runs involving over 150,000 people to demonstrate society’s awareness of road safety, as well as actions which have in total raised and donated more than 1.3 million euros for projects supporting victims of traffic accidents.

EuroPneus awards the Career Trajectory Prize to José Rebollo Fernández, president of Michelin Spain and Portugal
The managing editor of the publication EuroPneus, Carlos Barrero, presented the Career Trajectory Prize to José Rebollo Fernandez. "Behind a smart tyre, there is always an innovative company, comprising knowledgeable professionals who have understood how to combine technology and electronics with the complexity of the tyre during their entire careers," said Barrero. He continued, "Respect for shareholders, respect for clients, respect for people, respect for the environment and, of course, respect for the facts: five values that define José Rebollo’s career trajectory and him as a person at every stage of his life. He has contributed to progress in mobility for people and goods, and the advancement of our sector, holding senior management positions and working for the benefit of society as a whole."

José Rebello acknowledged the award with the words, "I am extremely honoured to receive this award, and I want to share it with the more than 7,500 Michelin workers who have made it possible. In the last 38 years, my role has been to give encouragement to an excellent team of professionals who work every day to ensure excellence in the company’s different areas, from research, through production, to distribution and sales." The president of Michelin Spain and Portugal continued, "I want to thank Michelin for allowing me to work in different positions and locations. Being part of Michelin has given me great satisfaction because it is a company with deep-seated ethical values which, over the course of its century-old history, have enabled it to adapt to new times, while at the same time managing to preserve the human values and principles that allow employees to develop both professionally and personally. During all these years, I have had the good fortune to work with excellent professionals, both at Michelin and at benchmark entities such as SIGNUS and the Spanish Rubber Industries Consortium, and, above all, with very good people, making my work not only easier but, on occasions, a real pleasure," he concluded.

Impressive industry support and attendance figures
200 people attended the prize-giving ceremony for the Hevea Awards for the Tyre Industry, most of them general managers, commercial managers and marketing directors from major companies in the tyre and fast-fit services sector, representatives from institutions and associations and, of course, the leading specialist automotive industry media as well as economic and mainstream media.