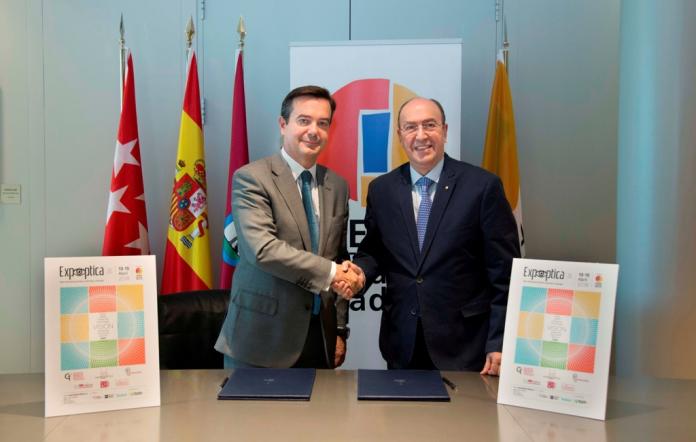 ExpoOptica, International Optics and Optometry Exhibition, organised by IFEMA and the General Council of Colleges of Opticians-Optometrists of Spain (CGCOO), has ratified a collaboration agreement. The pact was signed by the General Manager of IFEMA, Eduardo López-Puertas, and the president of the CGCOO, Juan Carlos Martínez Moral.

The agreement, which the parties renew on a regular basis, maintains the new features added for the 2016 edition, which are designed to encourage synergies between ExpoOptica and the International Congress of Optometry, Contactology and Opthalmic Optics, OPTOM, whose 25th edition will take place in the framework of the trade fair.

The agreement states that ExpoOptica and CGCOO will together organise the second Scientific Innovation and Technology Gallery, an exhibition of products, selected by experts, developed by companies and public and private bodies, that represent a technological or scientific advance with respect to those already existing in the market.

The Scientific Innovation and Technology Gallery, the first edition of which was very well received at the 2016 exhibition, seeks to recognise professionals and entities that undertake research, which is essential to this sector, helping to raise awareness of the innovative work carried out in the optical sector by companies and sector professionals, and by society at large. The Scientific Innovation and Technology Gallery is allocated a separate space in hall where ExpoOptica takes place.

Collaboration in the organisation of the ExpoOptica Forum
The agreement also provides for carrying out the so-called Foro ExpoOptica in the same hall, the purpose of which is to provide training seminars on commercial management of optical health enterprises, to improve professional training and to meet the needs of an increasingly competitive industry.

An initial preview of the seminar programme for the OPTOM Congress in 2018, held in the framework of ExpoOptica, revealed that there will be some very interesting topics of discussion.
For three days, and simultaneously, OPTOM 2018 will offer four plenary sessions on the subjects of dry eye, simultaneous vision, control of myopis and mblyopia. The congress will also include master lectures, sponsored lectures, 18 monographic courses, as well as more than 100 oral communications, four clinical courses, papers and a long list of contents that make up an attractive comprehensive training programme for attendees.

A more representative Organising Committee
In the meantime, there was recently a meeting of the ExpoOptica Organisers Committee. This body now better represents the sector, since it includes some new components (frame companies, etc.) who have joined existing members, such as the Spanish Federation of Associations of the Optical Sector (FEDAO); Spanish Association of Manufacturing, Marketing and General Imports Optics and Ophthalmology (AEO), and Visión y Vida).

With all this, ExpoOptica, with 31 editions under its belt, is taking steps to upgrade the event, strengthening its position as the leading trade fair for the sector in the Iberian market (Spain and Portugal) by adapting to its needs and those of its professionals, in vision, business, trends, training, innovation and fashion.

The 32nd edition of the event, organised by IFEMA, will take place from 13 to 15 April 2018 at IFEMA-Feria de Madrid.